If wrestling is the grand spectacle, then the WWE fans should not miss the WWE WrestleMania 35. This year WWE is about to present the WrestleMania 35. Of course, this event will be a prevalent one for wrestling fans all around the world. Many people have been waiting for the commencing of the 35th edition of the prestigious event. This time, the 35th WrestleMania will happen on April 7, 2019, at MetLife Stadium.

We are indeed speeding up to the WrestleMania actual event. It is a month away from the spectacular game and the waiting time will be an exciting time in the professional wrestling world. It has never been too early to look at the possible cards that you will witness in the festivity. It is great to discuss the match cards and predictions right away. 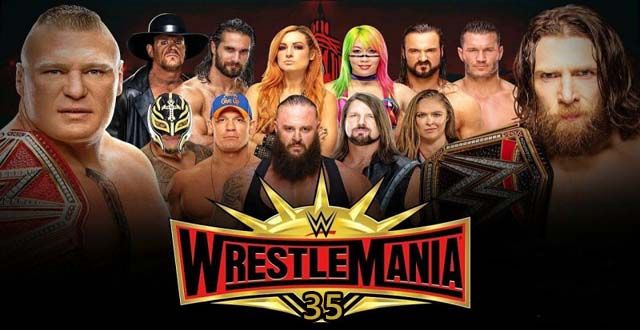 Possibly, it will be Ronda Rousey vs. Becky Lynch vs. Charlotte Flair. Lunch has won the second annual women’s, Royal Rumble. So, it is natural that she would be brave enough to challenge Rousey. But one-by-one will change to Rousey vs. Flair after the intervention from Vince McMahon. But still, it is possible to continue to triple threat.

The possible match is Brock Lesnar vs. Seth Rollins. Rollins deserves the spot in the Universal Championship after winning over the Royal Rumble. Although it is still speculation, the Rollins’ movements lately indicate that he will go after the universal title at the WrestleMania by taking on Lesnar.

Daniel Bryan will be likely to face against Kofi Kingston. Recently, we have been feeling great because WWE is moving to something more interesting. It is the right move to make the WWE title match at the upcoming WrestleMania.

Fans have been glad that Batista makes his return. After the encounter with the Ric Flair, he proceeded by calling out Triple H. Triple H vs. Batista seems to be going to the cards. We guess we need to wait until the final announcements are there. If it happens, it will be fantastic.

The match that will likely to happen is Asuka vs. Mandy Rose. Asuka, as the champion, has been feuding with several fighters to build the story tensions. But amongst them, the most significant one is with Mandy Rose. There’s a sensible reason behind this. It looks like the WWE officials are planning to make Rose emerge to the surface, and gets the attention.

The intercontinental championship is one of the most common events awaited by the wrestling fans. Despite the speculations, Balor has already attained the title. That means Lashley should face Balor for retribution. There are also other names to pop up like Elias and Drew McIntyre. But the story seems to direct on Balor vs. Lashley.

If you are the big fans of SmackDown Tag Team Championship, be ready to watch The Usos vs. The Hardy Boyz. It will become the close one championship title fight. Matt Hardy made a surprise return to SmackDown with his brother. It will surely draw the attention of both old and new fans to witness the hotshot. They will challenge for the titles at Mania.

We still remember that back then, McIntyre made Cena out from the Royal Rumble by injuring his ankle. Cena must hold first because there were obligations to meet. But after the Hollywood business ended, Cena would surely make his comeback to take revenge. This will likely happen.

It is a newcomer but has gained a lot of attention from the wrestling fans. There will be a 20-woman match to participate in this cool battle royal.

Cited as the greatest wrestling show on earth, it has a lot of surprises on every edition. You surely want to be part of this event. The reason is simple. It is not only about sports, but sports packed with great entertainment. WrestleMania has such great storylines which you will regret to miss. If you are the real fans of the wrestling fans, you don’t want to miss this.